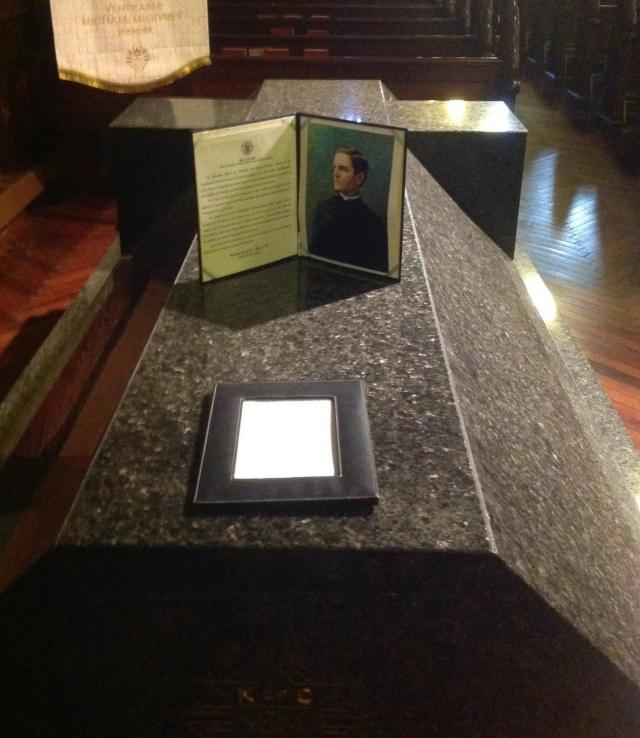 I recently spent a couple days back in New Haven where I lived a decade ago during seminary. While there, I visited Saint Mary’s Catholic Church in which the Knights of Columbus was founded back in 1882. The parish is passionate about the cause of sainthood for the Knights’ founder, Venerable Father Michael McGivney. He was buried in Waterbury in 1890 but his body was exhumed in 1982 and moved to Saint Mary’s where it remains enshrined for pilgrims to visit to this day.

I have long had mixed feelings about relics. I get the theology behind them. They are a testament to the power of the Incarnation and a reminder that holiness affects our bodies as much as our souls. If God dwells in someone and makes that person holy, then his bones are holy just as truly as his spirit is.

When I was in seminary, the dean gathered us one day to show us some old items that the school had collected from the founding of the Episcopal Church. Among them was a lock of hair from Bishop William White, the first Bishop of Pennsylvania and the longest serving as well as the shortest serving Presiding Bishop in the church’s history (it’s true, look it up). It is hard to imagine that Bishop White himself would have been comfortable with this.

That same year, I took a class on Christian pilgrimage. In the middle ages, the desire to touch a piece of the apostles was so strong that practically every church boasted of having relics. The professor remarked one day, “If you put together all of the ‘pieces of the true cross’ floating around back then, you could rebuild Noah’s ark several times over.” It is easy to see how a climate like that made the Protestant reformers question the value of relics. There is an ever present danger with relics that what begins as pious veneration can transform into pagan superstition.

Plus, regardless of the intentions, there is something unsettling about the idea of digging someone up who has been laid to rest. Of course, if you are going to do it, exhuming the whole body is preferable. In many places in the middle ages, people went to extreme lengths to acquire pieces of the saints, the ear of this one or the femur bone of that one. Back then, giving someone the finger took on a whole different connotation than it does today.

So given these misgivings, what did I do when I approached the body of Fr. McGivney? Here’s what I did: I knelt, I made the sign of the cross, I prayed, I kissed the shrine, I asked for Fr. McGivney’s intercession, and I praised God for His glory that shows through His saints.

The thing is, no matter how creeped out I might be by the concept of relics, the actual reality of them, enshrined and displayed in a sanctified place, simply radiates with too much holiness to be denied. Rather than seeming grim, the presence of Fr. McGivney’s body was a comfort. It bore witness to the fact that the saints and heroes of the faith are not demi-gods or apparitions. They are men and women who walked the earth on two feet just like the rest of us and whose bodies were flesh and blood just like ours.

Moreover, the idea that being in the presence of a relic carries a blessing is not so strange if you have ever known someone who was truly saintly. I have been privileged to know a few undeniably holy people in my life. These were people steeped in prayer whose hearts were so filled with God that when they walked into a room you could almost feel the air change. To be near someone who is so close to God draws you closer to Him as well. Why would that stop when the person dies?

If we believe in the Resurrection, then we believe that “to thy faithful people, O Lord, life is changed, not ended” (Book of Common Prayer, p. 349). Those who were called by God to be a blessing to others when they were alive can continue to bless us after death. Because of the Resurrection, even though they die, they live. Their bodies, made holy during their lifetimes, will one day be restored and reunited to them, but in the mean time, we continue to benefit from their blessedness. We continue to feel the air change around us when we are in the room with them.