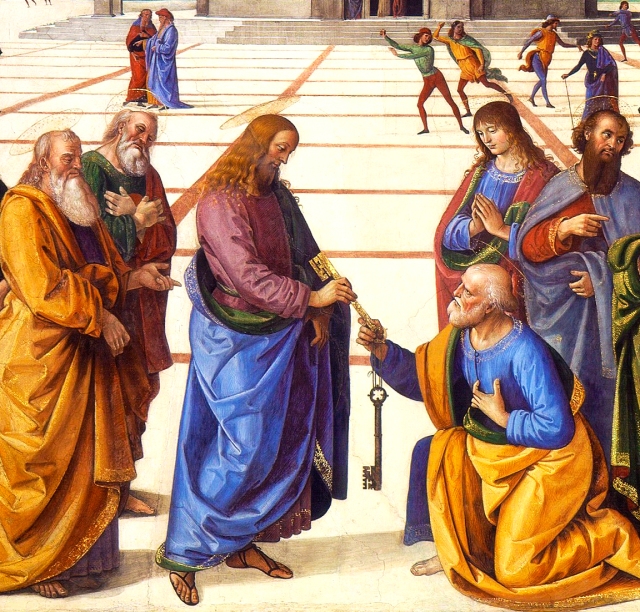 Jesus says in Matthew 16:13-20, “You are Peter, and on this rock I will build my Church… I will give you the keys of the kingdom of heaven, and whatever you bind on earth shall be bound in heaven, and whatever you loose on earth shall be loosed in heaven.” Peter is being given the authority to govern the Church. Catholics understand this to be about the papacy, but my Protestant friends often point out that the reason Peter is given this authority is because of his faith, because he confesses that Jesus is the Christ, the Son of God, not because of anything particularly wonderful about Peter himself. Faith, they say, is what should govern the Church, not some man sitting in a building in Rome, claiming to be Peter’s  successor. Faith in Jesus Christ, built only upon the Word of God in Scripture, should be sufficient. Yet there is another way of looking at the papacy that avoids this unhelpful division. What the papacy gives to us is not merely a means of governing the faithful, but a focal point for expressing our love and gratitude.

The pope does, of course, carry out a very important governing function. He’s the pastor of pastors, the bishop of bishops, and we need that kind of accountability. The buck has to stop somewhere. Otherwise, if every person is his or her own authority, we end up with chaos. Even if we say that the individual must be directed by the clear teaching of Scripture – how do we adjudicate disputes when my idea of “clear teaching” conflicts with yours?

Contrary to popular belief, the pope does not have unlimited power. He cannot just say something and then it becomes so. He exercises his authority through established means that make clear the difference between when he’s speaking with the full teaching authority of his office, backed up by centuries of precedent, and when he’s only offering an opinion or sharing an idea. And yet, guided by the Holy Spirit, he’s able to speak a word that settles an argument. He’s a living authority, capable of making sure that the Church never strays from her true teaching.

All of that is often where discussion of the papacy gets stuck, but the role of the pope is much more than that. He’s the embodiment of the Church.

Over the course of two thousand years, most Catholics haven’t been reading papal encyclicals. In fact, for most of history, in most of the world, about the only thing that the average Catholic knew about the pope was his name. But knowing the Holy Father’s name was a big deal, because it meant that you could pray for him. Popes are just human beings. Like Peter himself, they have all had their foibles. Some have been good, some have been bad, some have been downright scoundrels who kept mistresses, had their enemies murdered, etc. But the pope is always a living, breathing man, which is what allows him to stand as the embodiment of the Church in any given age. Just as every priest is an icon of Christ, the pope is an icon of the Church.

I was living in Philadelphia in 2015 when Pope Francis made his famous visit to America, celebrating Mass in front of the steps of the Philly Art Museum. I was with the throngs of people who made their way through the security checkpoints. They say there were over a million people. I’ve never been in a crowd that large before. Yet there was so much joy, even though we were packed in like sardines. Some of the Dominican sisters from Nashville were leading people in singing “Ave Maria,” “God bless America,” and whatever else happened to pop into their heads. When I finally saw the Holy Father, from a great distance but still unmistakable in his white cassock, I felt a great swell of love in my heart. It was love for him, but it wasn’t really about him. It was love for Jesus, love for the Church, love for the grace and blessing that God pours out for us in the Sacraments, and most of all just immense gratitude. Here before me was all of that, in a living man who I could see and hear, who prays for me even as I pray for him. And I knew in my bones that this is what it means to be Catholic.

I love the Bible, but I cannot be grateful to it, nor can I expect it to love me back. I love the sacred tradition of the Church as well, but the great genius of the Catholic Church is that she is alive, organic, real. The pope is not a concept. He stands in Peter’s place as an actual living out of the apostolic calling that Our Lord gave to Peter when he was first handed those keys.

It isn’t about choosing between being governed by faith or by a man. It’s about recognizing that as human beings, we need more than just abstractions. We need flesh and blood. We need solid symbols that point us towards the unity and healing that we can only know in Jesus Christ.

Note on the text: This was originally written to be a homily for Sunday, August 23, 2020, however I have been in quarantine since Wednesday because of a possible Covid exposure. Nevertheless, I wanted to share this brief reflection.

One thought on “The papacy and the call to Christian unity”