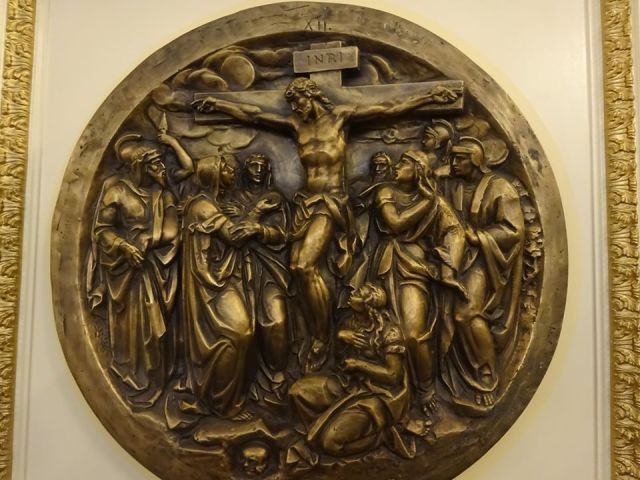 I had the privilege this past week of appearing as a guest on the radio program Theology on Air. It is hosted by a Lutheran pastor and aimed mostly at young Protestants, so while the purpose of my visit was theoretically to talk about comic books, many of the questions posed to me were about differences between Catholic and Protestant theology. This inevitably included discussion of the doctrine of justification and whether or not Catholics believe that what we receive through Christ is sufficient for our salvation or needs a little help from us.

I find these kinds of conversations tricky, not because I lack for things to say but because I want to avoid the danger of re-litigating the sixteenth century. I do not believe it does us much good to get stuck there, either defending or excoriating bits of history that are never going to change no matter who wins the debate. Nevertheless, there is spiritual fruit that can be harvested from an honest conversation on this topic, if we can stay in the mode of theology rather than apologetics, that is to say if we can stay in a mode of prayer, since theology is impossible where prayer is absent.

So, cards on the table: I receive, believe, and teach, to the best of my ability, what the Catholic Church teaches, which means that I do not believe in justification by faith alone. Truth be told, I was only ever a Johnny-Come-Lately to that particular doctrine anyway. By the time I graduated seminary, I was a full-throated Anglo-Catholic, albeit with an Eastward orientation to my spirituality. My understanding of salvation then as now was largely through the lens of theosis, beautifully summarized by the words of St. Athanasius: “God became man so that men might become gods.” We are saved by being united with God and thereby participating in the divine life of the Trinity.

It is not impossible to draw together some version of justification by faith alone with theosis. The Finnish theologian Tuomo Mannermaa, for instance, did some interesting work creating a bridge between Luther’s work and that of the Eastern Fathers. But most renderings of justification by faith alone require letting go of something that is crucial to Catholic doctrine, the idea that we participate in our own salvation.

There is no part of what Jesus does for us on the cross that we can take credit for. Even the choice we make to cooperate with the grace of God is a choice that, as St. Thomas Aquinas tells us, is entirely contingent upon God’s graceful action. Yet, that choice is a real choice, and the change that takes place within us is a real change. God does not just decide to treat us as if we were holy but leave us internally rotten. He actually transforms us through union with Christ, rendered possible through the cross and made manifest in the Sacraments. My Lutheran friends like to say, “Sanctification is just getting used to your justification.” Perhaps in a way they are right, but the means by which that unfolds is real transformation, not merely a surface-level realization that we have been passively accepted.

All of that said, I think that what is spelled out in the Joint Declaration on Justification made by Lutherans and Catholics in 1999 is helpful in dispelling common myths about where Catholics and Protestants differ on this topic. We tend towards different emphases, which leads us to different pastoral practices. There is a good deal that Catholics can learn from Protestant theology on this topic, particularly from Lutheran theology. There is an absolute emphasis on the cross there that is refreshing in an age when so many churches want to hide the harsh reality of the cross from view. Another of the things my Lutheran friends like to say: “If Jesus didn’t die in your sermon, you didn’t preach the Gospel.” That one requires nuance as well, but it is nevertheless a helpful tool that I still use to evaluate my preaching.

Perhaps most helpful is the Protestant insistence on the gift of justification. Catholic doctrine is clear that our salvation is something we can only receive freely from God and could never earn, that “while we were yet sinners, Christ died for us” (Romans 5:8). Yet we do not always stress this enough. We can give off the impression that salvation is a joint venture in which we are equal partners with God. In the formation of Catholics, we do not always emphasize as we should that the Gospel is not something we are required to do for God (or for others) but something that God has done for us in Christ.

Having said that, one of the most beautiful parts of Catholic teaching is the fact that God is presented not as a competitor with humanity but as the one who makes humanity authentically human. It has often felt to me, when listening to the way some Protestants describe justification, that they see it as an either/or situation in which either God acts or we do. We must never work for our own salvation because if we do, that must mean we are taking up the space that rightfully belongs to God. For Catholics, especially if we accept a thomistic view of the nature of God as being itself, the concept that our work could be in competition with God’s work does not make sense. Fr. Nicanor Austriaco explains why:

Fr. Nicanor is using this analogy in order to explain the way God acts in creation, but it works just as well for the way God acts in our salvation. We are justified by the work of Christ on the cross which is applied to us in the Sacraments. We may or may not have chosen to be baptized, but when we go to Confession, we are certainly choosing to receive this grace from Jesus. In that sense, we are active participants, as is the priest who absolves us. When we go to Mass, we become active players in our own salvation too, though we add nothing to the work of Jesus made manifest in the Sacrament. When we pray for others, we participate in their salvation, as do the saints when they pray for us. When we do good works, we grow in holiness as our love increases. None of this makes us competitors with God any more than the pen is in competition with the author.

We are not pens, of course. We have the capacity to say no to the gift of God’s grace. Yet when we say yes, it is not so that we may put on a show for God but so that He may truly be at work in us, changing us from the inside out into what we were always meant to be, prisms that reflect His light. In His generosity and love, God seeks to bring about real transformation in us by allowing us to take part in the mystery of salvation. That is part of the Good News too, not just that we are sinners who have been rescued, but that we are sons and daughters who are being prepared by a life of holiness for that day when the light will shine through us unimpeded.